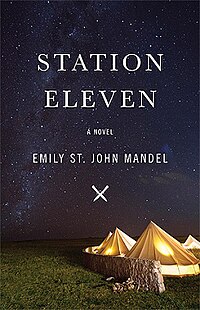 Emily St John Mandel’s post apocalyptic Sci-fi novel Station 11 starts off in a theater in Toronto staging King Lear. Arthur Leander is dying on stage, not in scathing review in the press sense of dying but, the phone me an ambulance way.

And so begins Mandel’s tale. A story of loss, belonging and survival. Because after Arthur dies who happens to be a big a deal in Hollywood even after 3 marriages and scandal, the Georgia flu arrives wiping-out most the population.

Told using a contemporary time-line and an after the collapse time-line Mandel uses both to tell the story from the point of view from Arthur’s perspective and the perspective of Kirsten w a member of a travailing acting troop. Bringing Shakespeare to the small encampments and towns that have sprung up after the Flu pandemic.

Mandel excels in crafting a spider-web of characters that all have been affected by Arthur in one way of another. Each character arcs from before the flu until after each suffering trials and tribulations. Everything is included for a reason and nothing feels superfluous in Mandel’s world.

Each sentence and word seems to be on the page for a reason, and not a case of a writer struggling to add filler. Mandel seems to create a vast yet tight book at the same time. But she does leave one stone unturned , one question that the reader will ponder on long after the book has finished

The characters muster all the emotions the reader should feel , the reader will root for the protagonist , hate the villain and in the end enjoy the end, even if it has that one question. Mandel while not over burdening the reader with description gives you just enough to imagine a world of broken roads, empty fuel stations and power stations that no longer turn.

On the strength of station 11 I went out and brought Mandel’s other books.