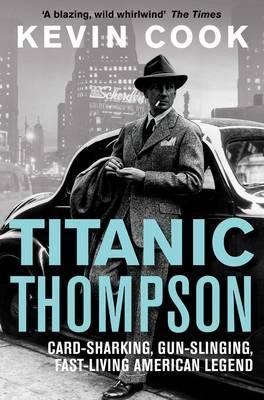 Before the email scams, before the internet scams, before people hacked face book and before ransom were scams. There were the grifter the honest to god conman. Names like Soapy Smith, Minnesota Fats, Amarillo Slim, hustling pool, sharping cards, hustling golf pros out of thousands travelling up and down the continental USA. Out of all these men and women who plied their trade offering bets with impossible odds and sure things. One man stood out among them all, the best of the best of the road gamblers; Titanic Thompson.

Kevin Cook’s biography tells the tale of the gentleman conman who travelled America making and losing more money in a lifetime then most could dream about. Thompson , golf hustler, card cheat, crack shot and master of the prop bet. Titanic’s story is set against a back drop of prohibition America, pool halls, back room poker games, Hollywood and swanky hotels. Thompson blazed across the states in his Packard, loaded with his.45, a set of of golf clubs both left and right handed and what every man who makes his living gambling a suitcase full of money.

Titanic is the romanticised grifter if there ever was one. Rubbing shoulders with the great and the good. Everyone from Howard Hughes to the local sheriff most people move in Thompson’s circle.

Cook’s portrayal of Thompson to the reader seems a little far fetched. The reader if they have had no knowledge of the conman’s modus_operandi would question what Titanic and his friends managed to get away with. The story can read somewhat fantastical. According to Cook it is true except one key scene that Cook reviles in the last part of the third act.

Many years I have spent learning the card sharp skills that Cook describes that Titanic executed poker games. I’ve never had the bravery to pull them of in a live game, most card cheating happens in private games Titanic him self said “It is to difficult to cheat in Vegas”. The card manipulation Titanic achieves is certainly real and can be done with practise. But where Titanic exceeds is golf hustles.

I am not a fan of Golf, it’s neither a sport I would sit down and watch let alone play, I have heard golfers wax lyrical of the game. I am in the Mark Twain camp of “Golf is a good walk spoilt”. In fact I have now read three books where golf features prominent; Alice Cooper’s Golf Monster which reads across between Autobiography and gold manual, James Ellroy’s first novel Browns Requiem and now Kevin Cook’s Titanic Thompson.

A mark of an excellent writer is to keep his audiences interest even when the reader has no interest in the subject. Cook by no means had me reaching for the Nine Iron I have ever enjoyed the golf scenes Cook puts to paper.

Like all Folk heroes when wrote about the author can fall in to the trap of sycophancy. Cook skirts in to this a couple of times but never fully immersing him self hero worship as soon as he treads the water he heads back to shore.

Thompson’s life had everything, wealth, women , friends, fans the twist at the end is a tragic ending that anyone can have. Cook knows his subject well and conjurers up the sympathy for his hero.

Cook’s biography on Thompson has a little bit of everything. But the characters larger than life and real are the reason the reader will invest their time in Titanic’s story. He took a few more years to sink than his name sake, but faded almost obscurity now. Cook helps bring the story of a remarkable man back in to lexicon of the conman. Forget your Ponzi and Madoff Thompson was charming good crook, a man who killed five people his charm never waned.

A worthwhile read of an American folk hero

2 thoughts on “Titanic Thompson the man who bet on everything. Kevin Cook (a book review”