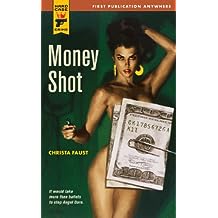 And that is the set-up to one of the best noir stories i have read for a while, conjuring up Thompson, MacDonald and chandler all at once Faust creates a world that is a contrast of darkness and light. A contrast that runs alongside Dare throughout the book. It is a bit paint by numbers at times but that is why we read noir, it is familiar. Dare is both Sassy and vulnerable. Able to deliver lines such as :

“My brain had decided enough was enough. It had simply put on a hat picked up two suitcases, and fucked off to parts unknown.”

The subject matter may turn some off (no pun intended) but this is a tightly plotted, action packed piece of noir that fans of the genre should embrace.

3 thoughts on “Money Shot by Christa Faust a book review”