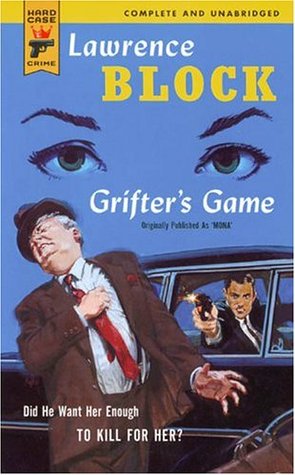 Exploring the femme-fatale theme Block’s Grifter’s game follows likable con man Joe Marlin, who hops from hotel to hotel stealing and grifting his way through life. Until he “borrows” the wrong mans suitcases. What’s more there is dame who is to Joe but will Joe do what is needed to keep Mona?

Block is a master of his genre Grifter’s Game is example of noir from the 60’s that holds well now. Joe Marlin develops through out the book and when the ending comes although you may not agree with Marlin you can understand how he got there. Block’s character development and story arc is tight the book weighs in at a mere 200 pages. Block writes with a rhythm akin to Elroy, in fact Block is somewhat darker than Elroy in places.

At he heart of Grifter’s Game is how far would a man go for love? And how far would someone go to be free? Despite it’s brevity Grifter’s game incorporates more in to it’s pages than most stories double the length can muster, a true testament to Block’s writing.