I am running out of space for physical books, I own everything Hard Case Crime has put out: everything by Chuck Palahniuk, Chandler and for some reason most of the Anita Blake Vampire Hunter novels, to name a few of my eclectic collection.

So to save space and money (in most cases) I went out and purchased myself a kindle. Amazon’s algorithm counting every hard boiled novel, decided to present Revenge Is A Red 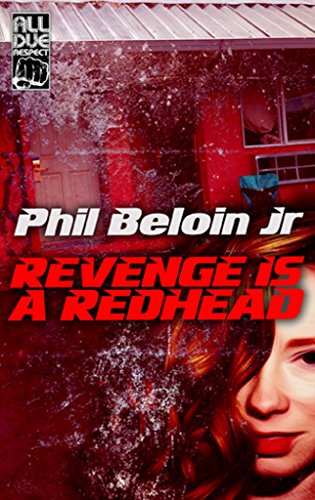 Less than an English £1 and 93 pages long I thought what can go wrong?

Phil Beloin Jr didn’t was a word on the page, pacing his story with edgy dialogue, action and just a bit of smut. The story follows, down on his luck Rich son of a cop, who  finds himself with out a home and part-time professional clothes remover and lady of the night Cherry Pop. Who meet at a “Gentlemen’s club” Rich has less than 75 cents in his pocket. Cherry takes a shine to him.

what happens next would somewhat spoil the plot so we will skip over that. Someone is wronged and revenge is sort.

Beloin creates two likable characters, who engage the reader and in the end you want to root for our duo even when they are slashing, shooting or beating people to death and in sometime even sleeping with them to death. According to Cherry it is not a bad way to after all the the french have a word for it.

if you like short punchy reads, good characters and modern noir then Revenge Is A Red is for you, if you liked Money Shot by Christa Faust then it is a must.